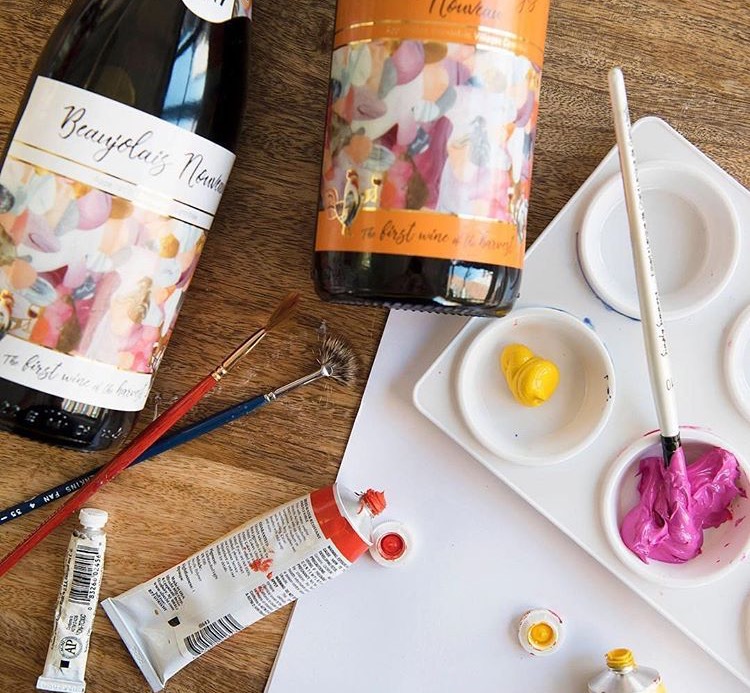 Posted at 21:11h in Uncategorized by Ari Azzopardi
Share

Every year, there are bad things we can count on: taxes and death. And good things: Thanksgiving Day on the fourth Thursday of November and on the Thursday before, the Beaujolais nouveau arrives. What is less predictable is just how this vin de l’annee (“this year’s wine”) stacks up.

Every now and then the young gamay from the Beaujolais region of France knocks the wine world’s socks off with good structure, fresh acidity and lush, ripe fruit, all snark of cherry Pez or fake banana Circus Peanuts temporarily silenced. But there is one thing that is a guarantee every year: Beaujolais nouveau labels are some of the prettiest around.

Georges Duboeuf hires a new artist to design labels annually, and in 2017 that artist is St. Petersburg mixed media artist Ari Azzopardi-Robinson. Azzopardi-Robinson’s work, “Candy Coated,” was selected from hundreds of submissions in a social media contest this spring. It will appear on as many as 1 million bottles in the United States. Most of the Thanksgiving tables around Tampa Bay will be a little “Candy Coated” next Thursday, and for Azzopardi-Robinson, that’s a thrilling thought.

“That’s what’s really exciting, that it’s such a widely distributed wine. I have friends in Missouri that will be able to see my artwork,” she said. “Seeing it on this bottle commemorating the 35th anniversary of the wine in the U.S., I’m honored. That’s what is so amazing about being an artist these days. I feel like there are endless options.”

Azzopardi-Robinson, 25, grew up in Tampa and attended Land O’ Lakes High School, then got her BFA at Lindenwood University in St. Charles, Mo. She took a painting class and “just wasn’t feeling it,” which led her into working with collage. She heard about the Duboeuf competition via Instagram, clicking through to the winery’s website.

“I read what they were looking for and it was perfectly describing my work: abstract with vibrant color,” Azzopardi-Robinson said. “It seemed like a good fit, but I’d never done a competition and to be honest I wasn’t totally familiar with Beaujolais nouveau.”

Duboeuf actually represents more than 400 winegrowers in the Beaujolais region and is the largest exporter of Beaujolais nouveau. The craze may have reached its frenzied acme in the 1980s, with boat races, helicopter airlifts and a host of more romantic conveyances each year to disseminate nearly 70 million bottles of deep-purple wine across the globe, much of it tippled in Japan, the United States and Germany.

Made entirely of the thin-skinned gamay grape from two appellations south of France’s Burgundy region, the year’s youngest wines are made via a process called carbonic maceration. Whole grapes are tossed into a tank and the process starts right there, each grape fermenting in its own skin. Because the grapes aren’t crushed, tannins are minimized and fruit flavors maximized, the upshot being a light-bodied, fresh and fruity wine with flavors like strawberry, bubblegum, kirsch and banana.

Azzopardi-Robinson will have plenty of time to get familiar with what’s inside the bottle, her label a profusion of warm golds, pinks and reds. She works at the Gallery at 200 Central Ave., No. 111, in St. Petersburg, which will be hosting an unveiling party Thursday from 6 to 10 p.m. She has a bottle signing scheduled in Sarasota and another at BJ’s in Tampa. Beaujolais nouveaus should be in stores after Thursday at an anticipated price of $10.99 to $12.99. Also, a number of local restaurants, often French, host Beaujolais nouveau release parties.